Washington Post provides a century's worth of temperature data for U.S. states and counties

NYT article about how global warming caused the wipeout of most life on Earth, 252 million years ago

Scientists from around the world are meeting to try to work out details for the fossil fuel emissions goals agreed to in 2015 Paris climate agreement.

Arresting Climate Change Was Within Our Grasp....

A very important report on a huge setback to efforts to stop climate change during the first Bush presidency.

Animals and stars both emit heat.  An exchange of ideas between two scientists in different fields has led to the recognition that software used to find stars and galaxies in space can be used to seek out thermal footprints and the animals that produce them.  A report on findings presented at the European Week of Astronomy and Space Science.

In a TV interview, EPA Director Scott Pruitt says humans have flourished before in warm periods, and it's "arrogant for us to say that we know what [the ideal surface temperature] should be in 2100."  Washington Post story is here.

The Washington Post reports on a new statistical study by Carnegie Institution for Science scientists, published in the journal Nature.

Permafrost is ground that remains frozen year after year.  This article in the New York Times predicts that Alaska's permafrost could be gone by 2050. Bloomberg reports that he thawing permafrost has buckled segments of the Alaska Highway, the key artery connecting the state with Canada and the northwestern U.S.

The Bulletin of the Atomic Scientists, which operates a symbolic Doomsday clock, today moved its minute hand a half-minute closer to the final hour.  It had been at three minutes before the hour; now it is at two-and-a-half minutes before the hour.  In a New York Times op-ed article, two scientists involved in the decision commented, "Never before has the Bulletin decided to advance the clock largely because of the statements of a single person.  But when that person is the new president of the United States, his words matter." 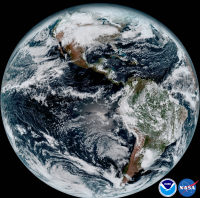 The National Oceanic and Atmospheric Administration (NOAA) today released a beautiful new set of images of Earth, culled from its GOES-16 satellite. Although the images are gorgeous, the real achievement of GOES-16 satellite is its sophisticated forecasting, enabling scientist to better predict severe weather on Earth.

The IUCN (International Union for Conservation of Nature and Natural Resources) released a new update to its Red List of Threatened Species. The update includes the first assessments of various crops essential to food security, and includes the information that the global giraffe population has plummeted by 40% in the last 30 years.

“Many species are slipping away before we can even describe them,” says IUCN Director General Inger Andersen. “This IUCN Red List update shows that the scale of the global extinction crisis may be even greater than we thought. Governments gathered at the UN biodiversity summit in Cancun have the immense responsibility to step up their efforts to protect our planet’s biodiversity – not just for its own sake but for human imperatives such as food security and sustainable development.”

Can anyone doubt that Donald Trump's election will be disastrous for our planet's future? Here's a New York Times story on the threat to domestic regulations and to Paris climate agreement.

This article in Science online reports on a study finding that the International Union for Conservation of Nature and Natural Resources’s (IUCN) Red List of Threatened Species has misclassified the threats to hundreds of animals.

The climate scientist Gordon Hamilton, who researched and publicized the consequences of glacier melt in Greenland, died on an Arctic expedition two days ago.  What a loss to science.